An abandoned military village in Germany could get a new lease of life as a hippy commune fit for the 21st Century.

Patrick Henry Village, near the German city of Heidelberg, was not born to hippy ideals.

In fact, it was opened by the US Army as a military base after World War Two, and was described by those who lived and worked there as a tiny slice of 1950s American transported to Europe.

It was closed in 2013, and since then the German government has pondered what to do with it.

The vision, says Prof Carlo Ratti - who runs the design company Carlo Ratti Associati and heads up the Massachusetts Institute of Technology Senseable Cities lab - is to transform it into an "experiment for future living".

"We need to try out different things - that is important as architects and engineers - because it is how human society progresses," he tells BBC News.

"We started this project with a question, 'What would a commune based on digital sharing look like?' And an island of America in Europe seemed like a good test bed." 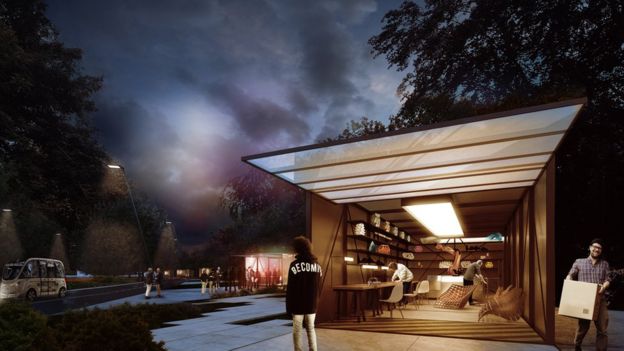 The commune will have small "fab labs", where things can be built

If the vision becomes reality, residents will share accommodation and workspace and produce their own food and goods.

"It may resonate with a certain demographic, such as students and entrepreneurs, of which Heidelberg has many," says Prof Ratti.

But it will be open to everyone, and potential residents are likely to be invited to submit their reasons for wanting to join online, with the community voting on who comes to stay.

At the heart of the commune will be the Maker Square, an area dedicated to digital fabrication.

The maker movement is a trend for individuals and groups to create products from recycled electronics or other raw materials.

Increasingly, it is making use of modern technology such as 3D printing to create cottage industries that can mass produce. 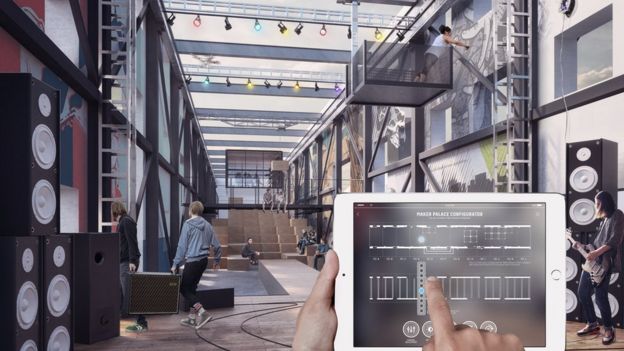 There will be a maker palace for artists and musicians

For Prof Ratti, a communal way of life is not just more sustainable but more sociable.

"If you live in a big city, you have access to lots of like-minded people, but in smaller communities you may only have a few thousand," he says.

"So why not create a like-minded community where it is easy to connect with people and sharing is the glue?"

IBA, the group that will ultimately decide what happens on the site, also heard proposals from other groups, including a car-sharing service to connect the site to Heidelberg using self-driving shuttles.

"It's about a process of transformation that we want to trigger," says Prof Kees Christiaanse, who works on the project.

"Today, we are experiencing an atomisation of economic activity in ever smaller units that work complementary to large global firms.

"Increasingly, we are depending on highly specialised small-scale enterprises.

"Carlo proposes a kind of infrastructure for these cross-fertilisations to take place, which will be of great value for developing the site." 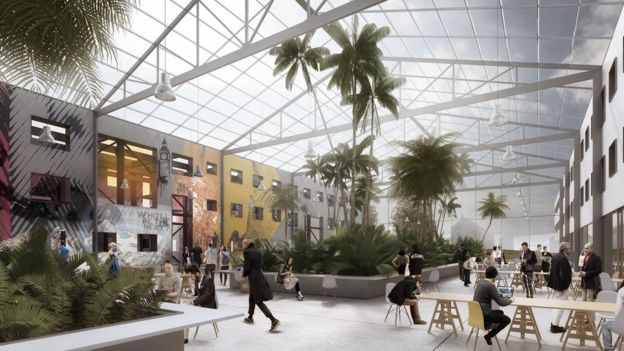 Living and working space will also be communal

Whether the project can create a truly sharing community remains to be seen, but marketing expert Prof Russell Belk thinks it is important to work out why people want to share in the first place.

"A sharing economy is more about short-term rental, via services like Uber, Airbnb or Zipcar," he says.

"True sharing is more like what happens within the family and in some non-profit communal sites like CouchSurfing and Majorna [a volunteer car-sharing service in Gothenburg]."

"Part of the difference is whether there is a sense of community and caring rather than simply convenience.

"The commune sounds to be somewhere in-between.

"Most sharing ventures are not long-term operations unless they have economic as well as social incentives."

The original article was produced by the BBC and was first published on the BBC website, available here.